A downloadable game for Windows

Undead Development is a zombie survival game with a creative building system for the HTC Vive and Oculus Rift.

This demo shows off the the introductory level where you can scavenge for loot, break apart furniture, board up your home, and defend against the undead. Use the dynamic nailing system to come up with creative ways to defend yourself.

This demo is in beta. The gameplay features are all implemented but I am still polishing mechanics and finding issues. Let me know if you find problems or think something should change to improve gameplay. Once I fix major issues and polish some mechanics I will start developing more content (lots more weapons/tools and bigger levels) to eventually release an early access version onto Steam.

please make a apk for this

Just wondering can you play on quest? Like playing in a web vr game

can you advance to different weapons in the demo or no?

how the hell do i move

do you need computer

Does this work on the oculus quest 2?

I would glady pay for this game again if it cam e to quest. It screams 6dof. You would bank

Awesome game, the steamVR version looks even better. Can't wait to try that out when I get some cash and some time. I had some suggestions, but it looks like you've covered most of them in the steamVR video I saw. I made my own video of the gameplay if you're interested.

have you thought about coop mod?

This is amazing, Best VR Build mechanic I have seen. The guns did leave a more than a bit to be desired (Aiming and 2-handed support would be nice). I feel like it would be #1 if it had some more polish and perhaps multiplayer. Definitely in my top 10.

I found An issue! This game is not out on PS VR! Please fix it!

This is so cool does it work with OCULUS RIFT?

Hi Edy6, this demo should work on the Oculus Rift.

Will this be released on psvr

I just found this game and it looks very cool and id like to play it but i don't have a vive or a good enough computer to run it and I was wondering if it could ever possibly come to the psvr :)

There are currently no plans for PSVR sorry :(

How do you play this game with windows 10? (without VR) When I spawn I'm just in the ground, no menu or anything. I can't move or turn at all.  (I've restarted 4 times now, hasn't done anything)

are you serious?
its a vr game, you can only play it with vr...

Reply
pepe the pog1 year ago

same thing with me but i had my headset plugged in

Hi there, this game looks pretty great. I'm not sure if you plan on keeping this as a paid-only game or continuing to offer a limited demo. In any event, I figured I'd ask you anyway.

I work at Mozilla on the Mixed Reality & VR team (https://mixedreality.mozilla.org/), working on WebVR (https://webvr.rocks/) and A-Frame (https://aframe.io/). We're working on the WebGL players for Unity/Unreal Engine to properly support the WebVR API (https://github.com/caseyyee/unity-webvr-export).

We'd be ecstatic and grateful if you're willing to share your game's source code with us — and my colleague and I will do all the hacking and experimenting.

We really want to be able to have good starting examples (and proof!) that with just a few button clicks, you can be loading your Unity/Unreal VR games directly from within your Web browser.

With your permission, we could also use your project as a case-study sample and share it as well on a few of our web sites.

Let me know if any of this sounds of interest to you. My email's cvan<at>mozilla<dot>com, or you can reach me on Twitter, @cvanw. Thank you very much!

This is what VR was meant for.

Add multiplayer and a mix this with Garys Mod and Steam will hire you (all) on the spot!

This is another Portal.

best game idea ever so fun to play not sure where i report bugs but i only have 1 also im playing on the rift so it may be diffrent but if you teleport as the round starts and your out side the house you gut stuck out side and then you cant make your way back and finaly i got to wave 17 :) but by then there were so many undead aswell as guns and bits on the floor the game laged for about 1/4 - 1/2 a second every time i shot a zombie also once all the building supplys get broken you just get left with a wall of bear traps as nothing else spawns.

regardless of that still the best demo ive ever played

ps "average session about a half hour"  XD

Hey StreetBoo, thanks for the feedback and bug report! Sorry that messed up one of your games. That is crazy you got to wave 17. The game is coming to Steam Early Access very soon on Oct the 24th. Tons of new content! If you play it I would love to know what you think. 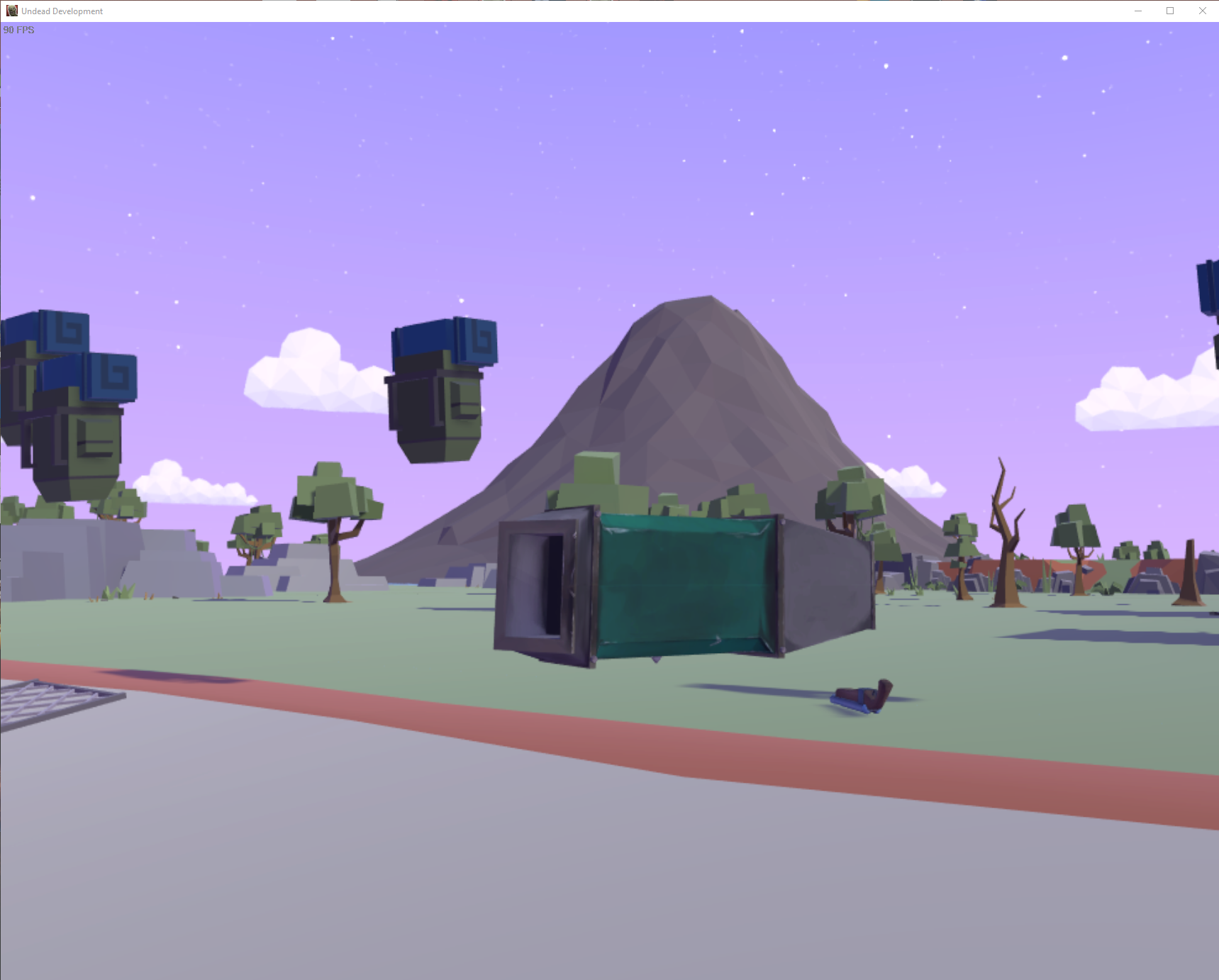 Hi sorry I never got back to you I was fairly new to itch.io at the time and it was over 120 days before I realized you had replied to my comment.

Anyway I got Undead Development as soon as it was out on steam and have been playing every update since. just played the v9.2 update that launched earlier today and its probably the best one yet, however I did run into a couple of bugs.

the first minor one was after I had died ( during a wave where you movement rate is limited ), I chose to exit back to the main base where you can select the level when I spawned in I still had the movement speed limiter and had to wait for the timer to move around the base.

I also had an old bug were you tool belt spots become unusable.

And one with the new bag mechanic I think up until about round 4 it was working perfectly, then one time when I emptied it, it stayed in the air playing the up and down emptying animation. so I tried to empty it again to see if it would fix the bug but instead it spawned a second bag with the same problem. (The items that came out of the first glitched bag then disappeared and the came out of the new glitched bag) any items that I put in the bag after the bug had happed would not come out of the bag, instead it would making the original two items disappear and come out of the bag again.

I’m afraid I have no idea what triggered the problem the only thing I can think of that I had done differently was that it was the first time I put a vacuum recycler in the back pack but I don’t think that was the problem.

Regardless I still really enjoy playing the game and always recommend it to people who are looking for a new VR game. But you would be surprised how many people shrug it off because it’s not multiplayer. Maybe something to look into in the future.

If you have any questions message me back here ill check this time :)

thanks and keep up the good work

Ladrik ..any news..mybe if you need donation for that awesome game??

Is some news ,how its going Ladrik?

Can you make it for rift? I love watching people play this game on youtube, and I want to try it. I have about 1/3 of the money to buy the Vive, and I have just enough for the rift, I know you can play it on the rift but most controls are broken-_-

Hey RanDomDood, sorry this is a late response. I wanted to let you know that the new demo version should have fixed the broken controls on Oculus. I still don't own a Rift but other players have said the game works pretty well now for the most part. I am hoping to use the funds from Early Access to purchase a Rift and better support it.

This is a great game I love it and can't wait till the full game on steam comes out but there is one problem. So i'm on the rift and how come it the same button to shoot and teleport (trigger)? Is there anyway I can change controls?

Hi, I have heard about this issue from other Oculus users. Unfortunately I do not have a Rift so it makes it harder for me to test and find a solution. I will try to address the issue but it may have to wait until I can get a Rift myself. Glad you liked the demo!

Cool I'm glad your planning on trying to fix it thank you.  The "A" button on the rift controllers doesn't do anything so you could always make that the button to teleport if that helps.

This game is about as bare-bones as it gets right now.

...AND I FREAKIN' LOVE IT. That nailing system is a stroke of genius. Can't wait to see what the dev adds to this. Made by just one guy too, impressive!

Here's 20 mins of gameplay, in case you want to check out the game but can't afford the hefty price of ABSOLUTELY FREE WHY AM I EVEN POSTING THIS JUST CLICK THE DOWNLOAD BUTTON ABOVE AND TRY IT OUT YOURSELF
Reply
MrManviFTAI5 years ago

Is there any possibility that in future, this game will also be played with keys along with VR? VR sure is amazing but not many people can afford it. So I'd like to see if the game comes out to be played with Keys n Mouse ;D However amazing job on the Demo

When I start the game, my character get stuck in the ground.

try restart the game, somethimes also i dont have heand and restart game and then is okey, but it is raw alpha / demo so it lot of bugs...

When bear trap is close can u reopen and how if can?

Use the trigger when your hand is on it or you are holding it.

Hey dev :) Finally got round to giving your game a crack, and it was actually a lot more enjoyable than I expected it to be. It still lacks depth, but that's to be expected, given that it's a very early access demo intended to show off the game mechanics and not much else. I'm looking forward to seeing what you do with it in the future!

Hiya! I played Undead Development AND I REALLY REALLY LOVED IT! I can't wait for more stuff! :D

Here's my video if you want to check it out -

Haha thanks for sharing. Glad you had fun. Sorry your ultimate weapon got stuck! I plan to address held items getting stuck in a future update. 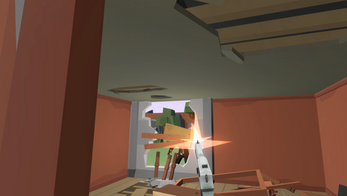 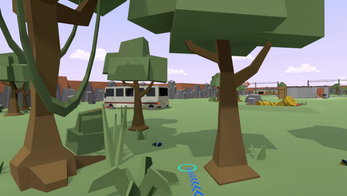 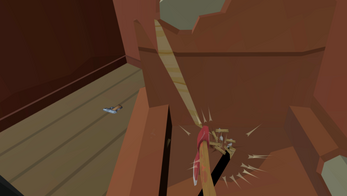 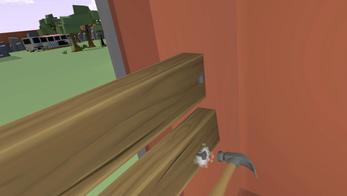 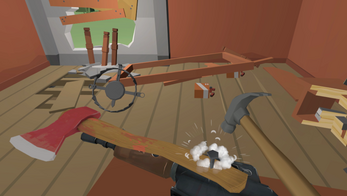 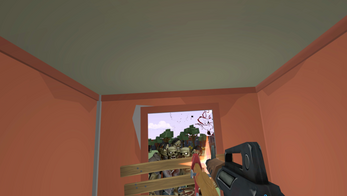